All Things Come to an End—Even Good Things!

The Soul Talk Guys have been bringing you amazing episodes—full of wisdom and learning—since their very first installment on April 18, 2014. It has been a wonderful, magical, and inspirational ride, and Tommy & David are extremely proud of what they have created together and delivered to you.

But we all come to points in our lives where we have to make decisions, and recently Tommy had a personal A-Ha that woke him up to a whole new opportunity in his life—something that he simply cannot ignore. Unfortunately, this new venture means that he won’t have the bandwidth available to continue with Life Mastery TV, so he will be co-hosting his final episode this week.

What does this mean for Life Mastery TV? Well, clearly things are going to be different going forward, and David will be looking for new ways to continue bringing this material to you. But for this week, the focus will be on celebrating one of the co-founders of this amazing team, and to wish him well on his continuing journey.

So, please join Tommy & David for the final episode of Life Mastery TV in its current form. Join the program to find out what to expect from Tommy and to wish him well in his new venture.

Want Inspiration? Then You’ll Want to Watch this Webinar!

Sometimes, there are things that happen on our planet that are just plain wrong. Imagine, for example, if you lived somewhere that had very little drinking water. If you weren’t already sick or diseased, if you somehow managed to stay healthy, then you’d probably be scrambling to find decent water for yourself and for your family. Can you imagine how hard your life would be under circumstances like that?

Believe it or not, this is a very real problem for a lot of people in third world countries. And for this episode, the Soul Talk Guys invited two amazing and powerful women to share one delightfully simple and inspiring way of solving this problem.

Spryte Loriano and Audra Erwin are definitely forces to be reckoned with. Spryte has been on a long-term journey to make the world a better place and has demonstrated her passion in many ways with 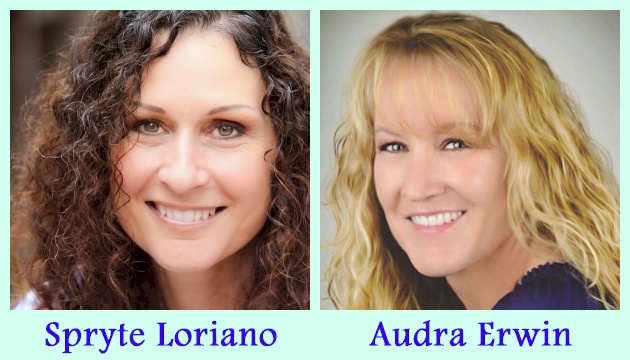 numerous projects that have contributed to many people’s lives. And Audra is a shining light in the world who—as the High on Life Coach—inspires and motivates people to live their lives with total abandon.

These two women found each other—inevitably, one might say—and teamed up to create a program to bring clean and delicious drinking water to 1,000,000 people who really need it. Clearly, these two amazing beings are prime examples of what it means to be

But guess what, friend? You can make waves too! One reminder that David & Tommy share from time to time is that your waves don’t have to be massive tidal waves. In fact, if you think about it, even a small ripple can often be enough to create a whole movement. All it takes is a recognition of a problem and an authentic, heart-felt desire to find a solution.

So watch the video and hear Spryte and Audra share some of their story. Let them be an inspiration for how you can find your own way to be

No matter what journey you are on, it’s a good idea occasionally to pause long enough to acknowledge and appreciate how far you’ve come.

Way back on April 18, 2014, Tommy & David had this crazy idea to do a bunch of webinars designed to help people live better lives. They decided to call their program "Life Mastery TV". Since then, David & Tommy have completed…(drum roll please)…

Well, today’s episode marks the completion of a whole year of amazing webinars, so David & Tommy decided that a celebration was called for! For their celebration David & Tommy invited a whole bunch of their favorite people to join them in a special 1-hour episode that turned out to be a boisterous and entertaining look back over the past year.

If you take a look back 52 weeks, what accomplishments and achievements and self-wonders can YOU acknowledge? What did YOU release; what did YOU surrender to in order to get where you are today? What lessons have YOU learned that you can apply in the next 52 weeks?

David & Tommy invited the following amazing messengers to consider these questions and more during this week’s celebration webinar:

If you have watched any of the webinars during the past year, then you may have met one or more of these people, and you already know the kinds of brilliance and wisdom that they bring to the world. Well, just imagine having them all present during one powerful, entertaining and illuminating broadcast!

Enjoy the replay video, and please leave a comment below!

No doubt, you’ve heard the phrase “Battle of the Sexes”. We think it’s high time to for a ceasefire!

There seems to be a commonly held belief among humans that we are all in competition with one another. We seem to believe that there is general scarcity everywhere, and that we have to fend for ourselves and make sure we get our share of whatever we imagine we need. This attitude and belief system has been so strong that some groups (those who perceive themselves as stronger or more righteous) have gone so far as to create wars with others in order to claim what they believe is rightfully theirs.

This general attitude has created divisions among people, and nowhere is this more visible than in the apparent division between men and women. In western culture, we have referred to this as The Battle of the Sexes, as if men and women are actually at war with one another.

Men have been heard to say things like “Women...you can't live with them, and you can't kill them.”

While these kinds of statements may seem funny in certain contexts, in reality they are actually hurtful comments that do nothing to improve relations between the sexes. At Life Mastery TV, we believe that it’s time to put a stop to this kind of thinking and to begin to heal the rift that we have created between women and men. So, this week, David & Tommy have invited two incredible women, Audra Erwin and Kristen Richardson—both of whom you have met in previous webinars—to balance out a discussion that they hope will motivate the creation of a

Ceasefire of the Sexes

Our intention during this particular show is to shed some light on the kinds of judgments that we have about each other, because we believe that—even if we don’t speak them out loud—our unconscious thoughts have a powerful impact on how we show up and how we treat other people.

This episode promises to be edgy and powerful. But as always, David & Tommy will keep things fun and educational. So, mark your calendar and join us for another FREE webinar.

Enjoy the video, and please take a moment to leave a comment below!

Do you ever find yourself wondering why life just happens to you? Wouldn’t it be great to turn that around so that you happen to life instead?

Well, that’s exactly what we talk in this webinar. And to really make it happen, we’ve invited our good friend Audra Erwin to join us. Audra, The High on Life Coach, is an international speaker, writer, author & host of her very own radio show The Happy Hour, Fridays at Noon Eastern on Toginet Talk Radio. In this episode, Audra shares her well-honed coaching skills, as well as her crazy and lovable wit and charm, to help make our already lively discussion even more exciting and light-hearted.

Creating the life you really want—really, what could matter more in life than that? Watch the video, and check out our discussion about things like this:

If you want to find out more about Audra, you can check out her website at AudraErwin.com.

And please remember to leave your comments below.